A Social Science Perspective of Influencing With Power 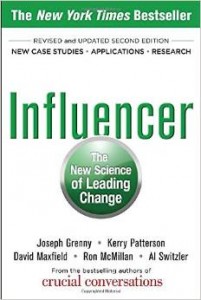 “The reason most of us pray for serenity rather than doggedly seeking a new solution to what ails us is that, left to our own devices, we don’t come up with the big ideas that solve the problems that have us stumped.  We fall into the serenity trap every time we seek solace when we should be seeking a solution.  To bring this problem to its knees, we first have to see ourselves as influencers” (p. 7).

“People tend to be better copers than influencers.  In fact, we’re wonderful at inventing ways to cope” (p. 8).

“To cite an often-spoken metaphor that helps us understand what’s happening….it’s as if a steady stream of automobiles is hurtling toward a cliff and then plunging to destruction.  A  community leader catches sight of the devastating carnage and springs into action.  However, instead of rushing to the top of the cliff and finding a way to prevent drivers from speeding toward disaster, the bureaucrat parks a fleet of ambulances at the bottom of the cliff” (p. 9).

Focus on a Few Vital Behaviors

“The breakthrough discoveries of most influence geniuses is that enormous influence comes from focusing on just a few vital behaviors.  Even the most pervasive problems will often yield to changes in a handful of high-leverage behaviors.  Find these, and you’ve found the beginning of influence” (p. 23).

“When faced with a number of possible options, take care to search for strategies that focus on specific behaviors” (p. 26).

“Discover a few vital behaviors, change those, and problems — no matter their size — topple like a house of cards” (p. 28).

E.g., the best teachers: “One of the vital behaviors consists of the use of praise versus the use of punishment.  Top performers reward positive performance far more frequently than their counterparts.  Bottom performers quickly become discouraged and mutter such things as, ‘Didn’t I just teach you that two minutes ago?’  The best consistently reinforce even moderately good performance, and learning flourishes.  Another vital behavior they found is that top performers rapidly alternate between teaching and questioning…(p. 33).

E.g., the best teams: “[They] behaved in ways that kept them from becoming cynical.  Their ‘recovery behaviors’ involved stepping up to conversations their peers avoided.  Team members vigorously but skillfully challenged their supervisor.  They were candid with peers who weren’t carrying their weight.  And finally, they were capable of talking to senior management — the same senior managers more cynical peers avoided — about policies and practices that they believed impeded improvements” (p. 39).

“People choose their behaviors based on what they think will happen to them as a result” (p. 49).

“Many thoughts are incomplete or inaccurate, leading people to disastrous, unhealthy, and inconvenient behaviors that are causing some of the problems they currently experience” (p. 49).

“The factors influencing whether people choose to enact a vital behavior are based on two essential expectations….First, it is worth it? (If not, why waste the effort?)  And second, Can they do this thing? (If not, why try?)” (pp. 50, 51).

“The most common tool we use to change others’ expectations is the use of verbal persuasion….When it comes to resistant problems, verbal persuasion rarely works….The great persuader is personal experience” (pp. 50, 51).

“[Intrinsic satisfaction] asks the question: Do individuals take personal satisfaction from doing the required activity?  That is, does enacting the vital behavior itself bring people pleasure?….The point?  If we could only find a way to make a healthy behavior intrinsically satisfying, or an unhealthy behavior inherently undesirable, then we wouldn’t need to keep applying pressure — forever.  The behavior would carry its own motivational power — forever” (p. 84).

“Actually, there are two very powerful and ethical ways of helping humans change their reaction to a previously neutral or noxious behavior: creating new experiences and creating new motives” (p. 88).

“Unpleasant endeavors require a whole different sort of motivation that can come only from within.  People stimulate this internal motivation by investing themselves in an activity.  That is, they make the activity an issue of personal significance” (p. 93).

Why Are We Morally Disengaged?

“Often humans react to their immediate environments as if they were on autopilot.  They don’t pause to consider how their immediate choices reflect their ideals, values, or moral codes….[Albert] Bundura has repeatedly looked at the question, How can we stimulate people to connect their actions to their values and beliefs? and has turned it on its head by asking, How is it that people are able to maintain moral disengagement?  That is, how do people find ways to enact behaviors that appear so clearly at odds with their espoused values?…These strategies that transform us into amoral agents include moral justification, dehumanization, minimizing, and displacing responsibility” (pp. 95, 97).

“Now for a corporate application.  If you’re a leader attempting to break down silos, encourage collaboration, and engage teamwork across your organization, take note.  Moral disengagement always accompanies political, combative, and self-centered behavior.  You’ll see this kind of routine moral disengagement in the form of narrow labels (‘bean counters,’ ‘gear heads,’ ‘corporate,’ ‘the field,’ ‘them,’ and ‘they’) used to dehumanize other individuals and groups.  To reengage people morally — and to re-humanize targets that people readily and easily abuse — drop labels and substitute names.  Confront self-serving and judgmental descriptions of other people and groups.  Finally, demonstrate by example the need to refer to individuals by name and with respect for their needs” (pp. 103, 104).

Change Of Heart Can Only Be Chosen

“What Miller teaches us is that a change of heart can’t be imposed; it can only be chosen.  People are capable of making enormous sacrifices when their actions are anchored in their own values.  On the other hand, they’ll resist compulsion on pain of death.  The difference between sacrifice and punishment is not the amount of pain but the amount of choice….When you surrender control, you win the possibility of influencing even addictive and highly entrenched behaviors.  And you gain access to one of the most powerful human motivations — the power of a committed heart” (pp. 106, 107).

“Many of the profound and persistent problems we face stem more from a lack of skill (which in turn stems from a lack of deliberate practice) than from a genetic curse, a lack of courage, or a character flaw.  Self-discipline, long viewed as a character trait, and elite performance, similarly linked to genetic gifts, stem from the ability to engage in guided practice of clearly defined skills.  Learn how to practice the right actions, and you can master everything from withstanding the temptations of chocolate to holding an awkward discussion with your boss….The critical factor is using time wisely.  It’s the skill of practice that makes perfect” (p. 121).

“To harness the immense power of social support, sometimes you need to find only one respected individual who will fly in the face of history and model a new and healthier vital behaviors” (p. 143).

“Smart influencers spend a disproportionate amount of time with formal leaders to ensure that the leaders are using their social influence to encourage vital behaviors” (p. 145).

“What predicted whether an innovation was widely accepted was whether a specific group of people embraced it.  Period. [Everett] Rogers learned that the first people to latch onto a new idea are unlike the masses in many ways. He called these people innovators….The key to getting the majority of any population to adopt a vital behavior is to find out who these innovators are and avoid them like the plague….The second group to try an innovation is made up of what Rogers termed ‘early adopters’….But they are different from innovators in one critical respect: They are socially connected and respected” (p. 148).

“If you are interested in engaging opinion leaders in your own change efforts, the good news is finding them is quite easy. Since opinion leaders are employees who are most admired and connected to others in the organization, simply ask people to make a list of the employees who they believe are the most influential and respected” (p. 152).

“People…pay attention to individuals who possess two important qualities. First, these people are viewed as knowledgeable about the issue at hand. They tend to stay connected to their area of expertise, often through a variety of sources. Second, opinion leaders are viewed as trustworthy” (p. 153).

“In a well-balance change effort, rewards come third. Influence masters first ensure that vital behaviors connect to intrinsic satisfaction. Next, they line up social support. They double check both of these areas before they actually choose extrinsic rewards to motivate behavior. If you don’t follow this careful order, you’re likely to be disappointed” (p. 194).

“Organizational scholars have long found that many employees leave corporate award ceremonies not motivated and excited as intended, but with exactly the opposite reaction. They exit demotivated and upset because they themselves weren’t honored. In fact, many see the whole ceremony as a sham. Interviews reveal that typically half of those who attend corporate awards programs believe that they were far better qualified than the person who was honored but that they didn’t get picked for political reasons” (p. 196).

“Don’t use incentives to compensate for your failure to engage personal and social motivation. Nevertheless, let’s be clear. Influence masters eventually use rewards and punishments” (p. 198).

“Once again, it wasn’t the cash value of the reward that mattered. It was the symbolic message that motivated behavior. It was the moral and social motivation that gave the token award supreme value” (p. 203).

“When you reward performance, you typically know that the reward will help propel behavior in the desired direction, but with punishment you don’t know what you’re going to get. You might get compliance, but only over the short term” (p. 211).

“The point isn’t that people need to be threatened in order to perform. The point is that if you aren’t willing to go to the mat when people violate a core value (such as giving their best effort), that value loses its moral force in the organization” (p. 216).

Change The Environment To Change Behavior

“Rarely does the average person conceive of changing the physical world as a way of changing behavior. We see that others are misbehaving, and we look to change them, not their environment. Caught up in the human side of things, we completely miss the subtle yet powerful sources such as the size of a room or the impact of a chair. Consequently, one of our most powerful sources of influence (the physical environment) is often the least used because it’s the least noticeable” (p. 222).

“The influence masters we just cited had one strategy in common: They affected how information found its way from the dark nooks and crannies of the unknown into the light of day. By providing small cues in the environment, they drew attention to critical data points, and they changed how people thought and eventually how they behaved” (p. 230).